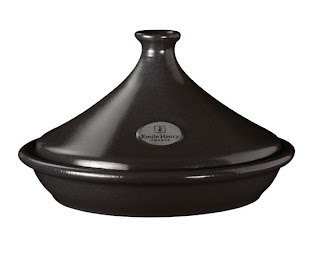 Do you have a foodie on your list that has a flair for the exotic? Emile Henry's Tagine would make a killer gift for the creative cook. It's eco friendly and makes a sexy, dramatic presentation on the table.
The word tagine refers both to the conical cooking vessel and the contents inside. The North African dish is not bound to a specific pot, you can still make a tagine in a braiser for instance, but it looks so much cooler in a tagine and it is supposed to work better in the proper pot. The idea is that the vapors, essence and juices of the food swirl around the cone and infuse the food with intense flavor. Emile Henry has fine tuned this old world cookware with modern technology.
I learned to make tagine in Morrocco from locals. We went around the medina gathering ingredients: tomatoes, potatoes, red peppers, onion, saffron, and paprika. Put this in a covered pot with a little olive oil, salt and pepper, cooked it for an hour or so and garnished with cilantro and parsley.
It makes a great camping dish--we ate this very meal under a giant moon in the Sahara desert. I've made this in the tagine pot with great success and every time I look at it, I think adventure. Tagines are very flexible and hard to mess up, so you can use your own creativity and change up the recipe. Tagines can contain raisins, chick peas, your favorite vegetables and couscous for instance, popular spices for tagines include tumeric, cumin, and cinnamon.
Emile Henry's cookware is green--no toxic chemicals to leach into your food. It is made to go from the freezer to any heat source without cracking and clean up is easy. As as serving dish, it will keep the food hot for a long time on the table. It comes in several colors, and is very aesthetically pleasing, like functional art. You can find it HERE.
Tweet
Posted by Eco Mama

This is beautiful. Thank you for the great idea. I like this one even more than the last Emile you posted.