Is Your Couch Killing You? 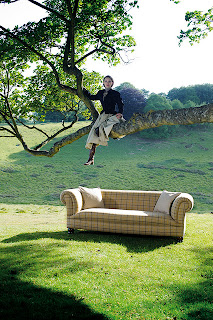 It's time for us to get a new couch.  This has turned out to be no easy feat, since I obviously want a couch that does not contain hazardous chemicals.  I was aware of the dangers of flame retardants and I set out to find a sofa that was chemical free.  That shouldn't be too hard, should it?  Actually, it's nearly impossible.  And the reason why will blow your mind.

In the US, furniture manufacturers are required by law to treat their fabrics with flame retardants.   Seeing as flame retardants don't work, but merely release toxic smoke into the air in the event of an actual fire, and seeing as they contain carcinogens and chemicals that are extremely harmful to humans, this makes absolutely no sense.

I thought, this can't possibly be right, but it turns out the tendrils of this atrocity reach to some pretty dark places, namely the tobacco industry.  You read that right--the tobacco industry started the whole thing.  At some point a couple of decades ago, pressure was put on the tobacco industry to do something about making cigarettes less flammable since so many fires were started by them.  Ridiculous in and of itself, but the response was to come out with flame retardant chemicals.

When evidence emerged that these chemicals caused cancer, infertility, asthma, and a host of other health issues, the tobacco companies, ie producers of the flame retardants, came back with a bogus committee called Citizens for Fire Safety which consists only of three individuals--the producers of the chemicals!  They managed to get laws passed, in part by using false testimony from a physician detailing grisly fake fire deaths of children,  requiring that these chemicals be infused in our furniture.

So now, because of this despicable farce propagated by the tobacco industry and no doubt corrupt politicians, you and I can't get a safe couch for our family.  Our children sit on this furniture, they breathe the off-gassing of these chemicals and the toxic dust they create in our homes.  This is so unacceptable!

What I am hoping, is that with growing awareness thanks to mainstream press like the New York Times and Chicago Tribune (click those links for a wealth of details on this subject), that something like the BPA movement will happen.  As consumers demand non-toxic furniture, change will happen.  I personally contacted several very popular furniture manufacturers and expressed concern and forwarded a link to that New York Times article so they could pass it along throughout their companies.  Luckily, the were receptive, but also very defeatist with the sentiment that, "our hands are tied because of the laws."  If you agreee this is an outrage, please help me pass this information along, we need to get those flame retardants out of our homes.

Want a super healthy super delicious portable snack?  Try  Kelp Krunch, from Maine Coast Sea Vegetables.  July 20 is the last day to order before they close down for the season, not to reopen again until September 4, so be sure to stock up.  They're great for camping, travel, kids' lunches, and any time you need an energizing delicious snack.
I love these!  They are low in calories and high in nutrition and also organic, vegan, and gluten free--the perfect snack.  They are made with sesame seeds and kelp, and are sweetened with rice syrup.  They have a wonderful crunchy texture and a salty-sweet flavor and I could probably eat a whole box they're so good, so luckily they are individually wrapped to help with restraint.  Those of you that can control yourselves may buy it in bulk.
Sesame seeds are very high in calcium and seaweed is loaded with minerals and nutrients.  I ordered three cases and after my first bite realized I should have ordered more.  I've never tried the Ginger flavor, but I can highly recommend the original. A portion of the sales goes to Allied Whale for whale conservation and research.  Stock up on these and other fantastic sea vegetable products HERE.
Tweet
Posted by Eco Mama 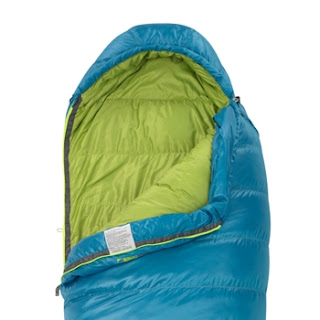 Campers who live in rainy environments have an ongoing dilemma when it comes to sleeping bags.  Even more so with backpackers trying to minimize weight and maximize warmth in wet conditions.  Down is warm and light, however if you get it wet, you're in trouble.  It doesn't dry fast, it won't keep you warm, and you might end up not having anything to sleep in.  With a synthetic bag, you gain weight and lose warmth but if the bag gets wet, there's a chance you could still sleep in it and it's possible it could still provide warmth.  Also they dry faster.  So you have to kind of hedge your bets. 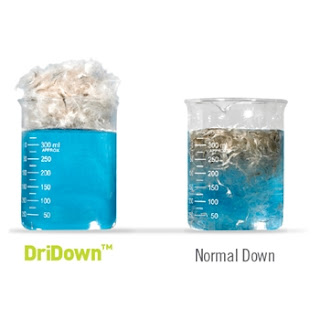 Until now.  Enter the new Sierra Designs line of DriDown Sleeping Bags. These offer a new technology called DriDown that keeps your sleeping bag from looking like a drowned cat should it get wet seven times longer than regular down.  This is a game changer.

Each individual plume is coated with a hydrophobic finish which help keeps it dry, makes it loft better, and allows it to dry faster.  It has the benefits of down, being light weight and warm, but has a much better chance of staying dry.

The women-specific Eleanor is shaped to better accommodate the female body, and is a toasty 600 fill.  There's extra loft in the foot and hood area because most women are sleep colder than men.  I was able to try this out over the weekend and suffice to say, I'm in love.  First off, it's butter soft, like a dreamy combination of clouds and marshmallows.  The the colors are beautiful.  I love the blue with the lime green lining and zipper, it's a very good looking bag.  But I just can't get past how cozy soft it is, very cuddly and just what you want when you crawl in for a sound sleep after an active day.   I'm also a cold sleeper and thought the bag was plenty warm for a temperature in the 40's.  At 5'5 and a medium size, this bag fit me great and I felt like I had plenty of room.

The zipper does not stick and there's another one at the bottom so you can let a little air in if you get warm.   It comes with a mesh storage bag (I prefer to store it by hanging it on a hanger with the loops on the bottom and store it in the closet) and a stuff sack.  If you are looking for a sleeping bag for Summer adventures or just need an upgrade, be sure to check this awesome bag out.  Find it HERE. 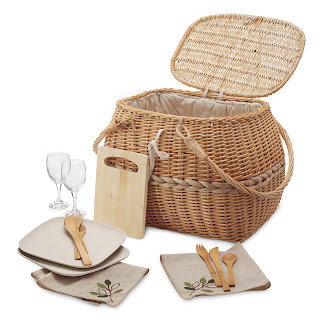 This weekend, weather providing, is a perfect time to pull out the picnic basket if you haven't already, and head to the park.  Don't have a picnic basket yet?  I have a beautiful green option for you that will take your picnics to five star.   Check out this old school Eco Friendly Picnic Basket Set from Uncommon Goods. It's gorgeous!  And brimming with old school-charm.  Even better, it's made with eco friendly and can be used over and over.  Everything is made from natural and renewable materials, like the bamboo flatware, plates and cutting board to wine glasses made from recycled glass.  It's chemical free, has no weird smell (some do, from dyes and other chemicals) and comes in a two person or a four person version.

There's plenty of room for lots of food that you could either make at home, or stop by your local co-op's deli for some healthy fare and head on out.  Everything you need is already packed and ready to go, just add food and drink.  I'm thinking some kalamata olives, organic French bread, salad, sparkling apple juice, and maybe some organic chocolate to top it off.  If you need some picinic inspiration, I highly recommend this beautiful basket.  If you already have one, it would make a fabulous gift.  Find it HERE. 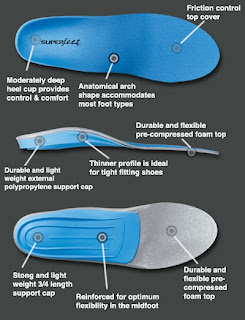 How do your feet feel right now?  Want better posture?  Better shock absorption, better balance?  More arch support and shock absorption?  Superfeet Premium Insoles are made to give your feet the support they need for proper spinal alignment.  This, they say, does not happen with standard insoles that come in shoes from the manufacturer.

They're very easy to fit to your shoe.  You just take out the insole that came with the shoe, match it up to your Superfeet, and trim off any excess.  Then you put the Superfeet insole back in your shoe, and you're good to go. 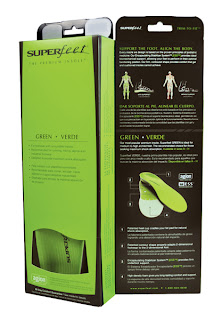 Superfeet come in a variety of colors, each designed for a specific activity, like skiing, or hiking, or biking for instance.  I heard about Superfeet Greens from a backpacker and that got my attention, an insole that would offer extra support while you carry around a heavy load.  I wasn't really sure at first, because I'm used to the more squishy insoles and i had to get used to the stiffness of the Superfeet.

After trying them out, I really like them and I do feel my feet are getting more support.  If your feet are happy, you're going to have a much better experience whether you are backpacking, hiking, or just walking around town.  I think if it's good for the health of your feet, it's totally worth it.  Find them HERE.
Tweet
Posted by Eco Mama