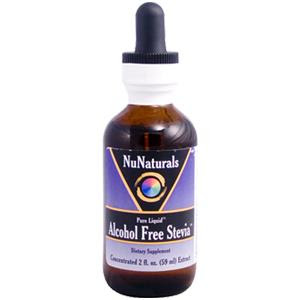 I have been using NuNaturals Liquid Stevia

now for the last couple of months and I must say, I really am hooked. It took several tries before I found a stevia that I could stand--some of them taste like nutrasweet to me--in other words, blech.  You Do Not want to use artificial sweeteners such as asparatame, but I'm sure my readers already know this!  (Skinny Bitch

has a wonderful chapter on this subject, by the way and the history and dangers of Splenda).

The South American plant, stevia, which has been used for centuries, seems to be a healthier alternative.  After some experimenting I finally settled on the Trader Joes brand.  But after reading Natalia Rose's books and adopting her dietary regimen, I discovered NuNaturals stevia, her brand of choice.

What I love about this brand is it's mellowness.  It doesn't assault your taste buds, and there's no weird aftertaste.  I also love the glass bottle with dropper.  The liquid form is much easier for me to negotiate than the packets I had been using from TJs.

I use it to create salad dressing by mashing up an avocado, adding lemon, stevia, salt,pepper and onion salt.  It blends easily with no mess.  I also use it in my green juice when needed, if I get a particularly bitter batch I will add lots of lemon juice and a drop or two of stevia.  It's also great in chia porridge and smoothies.

If you haven't tried NuNaturals yet, or think you don't like stevia, I urge you to try it in this form.  They also make the packets for those who prefer powder, and another form that is used specifically for baking.  Find it HERE

Cell Phone "Study" Motivates Me to Make a Change 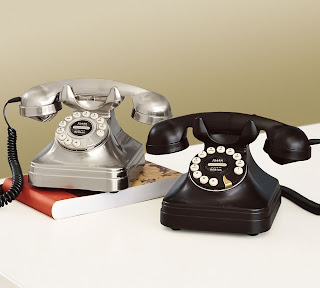 They're trying to tell us that cell phones are relatively safe, but the so-called study from Interphone was not realistic and not conclusive.  They're saying cell phones may or may not cause brain tumors.  This sort of thing really urks me--they know cell phones are not safe.  They found that anyone using a cell phone for 10+ years has at least a doubled risk for brain cancer. "Heavy Users" have an increase of 40% risk. "There are suggestions of a risk."  What?

Children, who are much more vulnerable, are using them and this is unacceptable.  Another study, in Sweden, found that people who  begin using cell phones in their teen years and on into adulthood for ten years had a 400% increased risk.   At least allow parents to be educated enough to make an informed decision, don't whitewash the danger.  Men aren't even supposed to carry cell phones in their pants pockets because they kill sperm.  Does that not freak anybody out?

Bluetooth and speakerphone are the solutions that I keep hearing about, but for me, that's not going to cut it.

Bottom line for me--I do have a cell phone, but it's for emergencies.  On rare occasion (less than once a month) when I need to use the phone to connect with someone I'm trying to meet up with or whatever, I put the phone on speaker and make the call as short as possible.  I made this change long ago, so I'm okay there.

The concern I have is my cordless phones at home.  There are no conclusive studies there either, however many claim that though it's a different frequency than cell phones, it's still dangerous.  Some say they're even more dangerous.  So, rather than fretting about this any more, I am going back to the land line.  It sucks because I love my pre-programmed numbers, I love my caller id, I love that I can walk around a be productive while I talk (yes I know they make land lines with these features, but they are not the same at all).  This will not be an easy change for me, but it's worth it.

I am a technology geek.  I love technology, and I am in no way suggesting technology is a bad thing, I just want it to be safer.  And I want profit to take a back seat to the health of human beings.  I'm so fed up with this make a buck at all costs to the consumer mentality here in the US.  We all have to be so on guard all the time--it's ridiculous.  They poison our food, our water, our air, and on and on.  We shouldn't have to research everything before use--it should be standard that things are safe before going on the market. 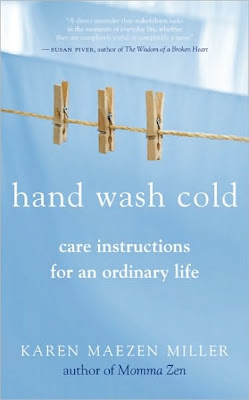 Every now and then a book will find its way into your hands that feels like an intimate conversation with  an old friend.  For me,

is one of those books.

Not really all that instructional per se, this book is unassuming and comforting and lets you know you are not alone in your endeavors with spirituality, relationships, motherhood, and mundane tasks like laundry which Miller uses both literally (we need to get our hands dirty) and metaphorically.   Real, meaningful life is deeply embedded in the mundane tasks and Miller is validating and celebrating those moments which go unnoticed, begrudged,  and/or delegated to others because we think we have more important work to do.

As  a child I was painfully aware of the passage of time and since becoming a mother I ache with this awareness.  Still it's quite an effort to stay in the moment and really experience the present (cliche as it is).  Precious moments with the most important person in my life, my son, pass by at light speed.  Miller totally gets it, has struggled with it herself and offers compassion and insight.  Embrace your life as it is, right now, she encourages.  Be present in your own life.

She shares her own flaws and vulnerabilities and made me cry, more than once.  She is a Zen Buddhist priest but that doesn't come through so much in this book, and I think that's the point.  She is not cold and detached, but warm and accessible.  Never did I feel in reading this that someone more enlightened than me was telling me how it is, there's nothing lofty, just something Raw and Real.   I can't wait to read Miller's former book, Momma Zen: Walking the Crooked Path of Motherhood. 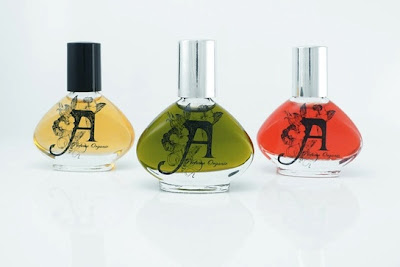 Most of my readers already know that most perfume is bad news.  I love fragrance--from the plant.  Essential oils can be very soothing, invigorating, and pleasing, evoking mood and atmosphere.  Synthetic perfumes and fragrance, on the other hand, send me right into migraineville and with good reason, they are comprised of dangerous chemicals.

A Perfume Organic is a healthy alternative.  It comes in a pretty bottle, is non toxic and smells great, I like the ylang ylang heavy Green.  There's no reason to buy toxic, carcinogenic perfumes when this is available.  Also--essential oils smell infinitely better than the toxic stuff.  A Perfume Organic is USDA certified organic, freshly hand made  and comes in a plantable eco friendly box.  Find it HERE.
Tweet
Posted by Eco Mama 4 comments: 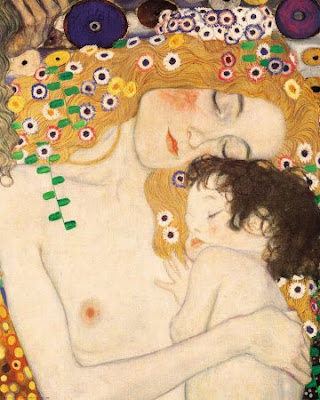 Happy Mother's Day dear readers.  I hope you have a day full of nurturing and love and a good dose of Mother Nature.

Satya Jewelry--Wear Something With Meaning 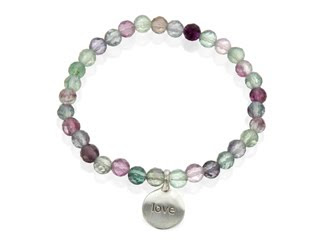 This is the kind of jewelry that speaks to you.   Symbolically, in the traditional significance of the gemstones and with words, Satya Jewelry gives meaning that makes for a great gift (think Mother's Day) or treat for yourself.  If you are working on gaining more peace in your life, for instance,  how nice to look down and see a beautiful reminder around your wrist.

This Love bracelet is comprised of faceted Fluorite beads, said to be good for inducing a sense of calm.  It's sparkly and feels wonderful to the touch, the hand cast sterling love charm is a sweet touch and the ultimate mantra.  Their website is filled with so many fabulous options, you can easily get lost.  I love the versitility of the jewelry (wear it with a dress or jeans), and there is something for everyone.

Satya Jewelry is a company with heart and works with charities, donating 100% of proceeds from specific pieces.  Satya, meaning truth,  is inspired by international travels, different cultures, nature, and the designers experience in a fascinating world.  Find them HERE.
Tweet
Posted by Eco Mama 5 comments: 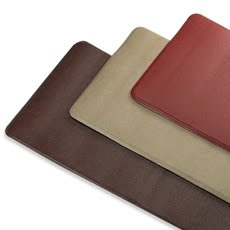 Made of eco friendly non toxic material, this Sublime Comfort Mat is indeed sublime.  It's like standing on a cloud and takes that pressure off the lower back and knees but it's firm enough to provide support.  After you try this, you won't know how you lived without it.

You know how your legs can ache after being in the kitchen too long?  Washing dishes, food prep, cooking, etc. can mean a lot of time standing on a hard floor.  This mat makes those chores much more enjoyable and leaves you with energy left when your finished.  It really functions great as an anti-fatigue mat.

They come in different colors, textures and sizes and would make an awesome Mother's Day gift.  Totally worth it and highly recommended!  Find it HERE or locally at stores like Bed Bath and Beyond.
Tweet
Posted by Eco Mama No comments:

For Mother's Day: The Gift of a Good Night's Sleep 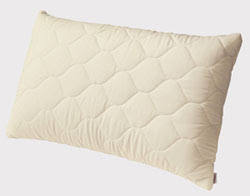 Every mom I know is in need of a good night sleep.  The Clean Bedroom is one stop shopping for everything you need for allergen and chemical free sleep.  This Natura Organic Pillow would be a great pick for Mother's Day.  Natura pillows are wonderful and there is one for every possible variation of sleeper.  Something as simple as a pillow can make a huge difference in sleep quality.  This pillow is great for the side sleeper and is very plush and decadent.

I strongly recommend getting a pillow cover to protect your pillow from dust mites and other potential messes--spilt juice from your breakfast in bed for instance.  From organic sheets to quilts to pajamas, find everything you need at THE CLEAN BEDROOM.
Tweet
Posted by Eco Mama 2 comments: