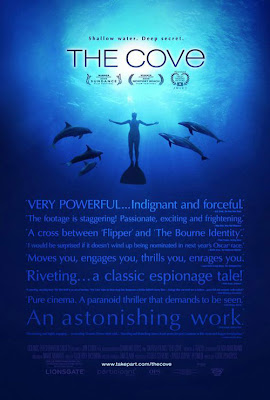 Animal Planet is airing award winning documentary, The Cove for the first time on Sunday.  I've wanted to see this for a long time, but it's the kind of movie that will shake me for days.  The film follows a group of activists as they expose the killing of dolphins in a remote cove in Japan.  I'll be watching tomorrow at 9 pm (check your local listings).  Blood Dolphins, Animal Planet's new series, will continue the efforts to expose what is happening to the dolphins and strive put an end to this tragedy.
Tweet
Posted by Eco Mama No comments:

If I could afford it, and if it were available, everything in my house would be organic and sustainable.  I believe it's so essential to scrutinize everything that comes into the home to be sure it's safe for our families and animals.  The chemicals that cause cancer and disease in us have the same effect on animals.  It's important to make sure our dogs have bedding and gear that won't make them sick. 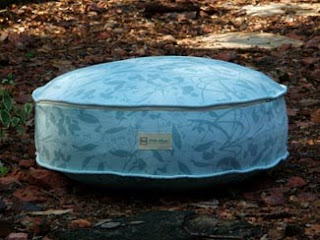 Bella Dogga is a wonderful find for companion animals.  Their beds are completely non toxic, chemical free, and are made with beautiful organic cotton fabrics.  The filling is soft organic kapok and the beds are cozy and durable.  The cover is removable for washing and the piping gives it a rich finished appearance.  It's a very luxurious bed and the dog seems to really appreciate it! 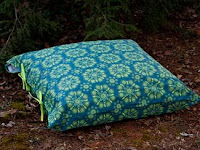 Bella Dogga beds and covers are made by hand to order.  They will work with you to make sure you have the appropriate size for your dog (I think they would be great for cats too), and they have that made-with-love feel.  Find them HERE.
Tweet
Posted by Eco Mama 3 comments:

Fun Green Things for Back To School


Some of the designs are great for adults as well as kids.  My son and I will be fighting over this British Invasion lunch bag which is big enough to hold anything you could want for lunch.  The bag stretches, so if you want to pack a lot, there is give.  Very well made and cool looking. 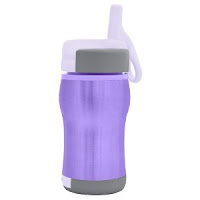 Nathan Kids Sport Bottles are not only attractive, but non toxic unlined stainless steel. No BPA or aluminum here. I love the wide mouth which makes for easy cleaning.  They are the perfect size for kids' lunch boxes and come in several cool designs.  Our favorite is the glow in the dark firefly bottle.  Nathan makes large and extra large bottles for bigger kids and adults, lots of colors and designs to choose from, ergonomic shape, comfortable spout and no leaking. 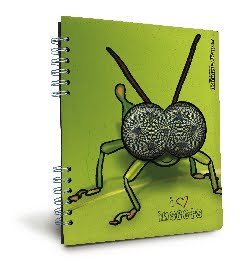 Banana Paper Spiral Note Books are unique in that not only are they sustainably made from banana leaf, but they are wide ruled as opposed to the typical college ruled notebooks. Great for younger kids as well as older kids.  They come in very cool designs--this mod looking cricket is textured and feels good to the touch.  Available at Red Apple School Supply.

Paper Mate Biodegradeable Pencils and Pens:  The pencils are made from recycled wood, and the pens are made from biodegradeable plant sugars.  You can try this fun experiment from Paper Mate: Plant the biodegradable pen or pencil in the backyard, check back each month and watch it biodegrade back into the earth!  Learn more at www.papermategreen.net/us/. 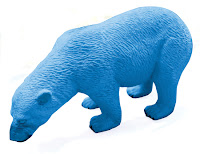 Check out these fabulous Endangered Species Erasers from Kikkerland.  They are big and hefty and double as a cool ornament/toy for the desk and 2% of proceeds go toward helping endangered species through the Center For Biological Diversity. 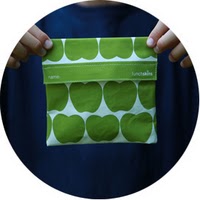 Instead of using plastic baggies, how about these reusable bags from Lunchskins?  I love the green apples!  Not only do you reduce landfill content and save money, but they are fun and cheery.  They're made from cotton, are washable, and have a place to write your child's name. 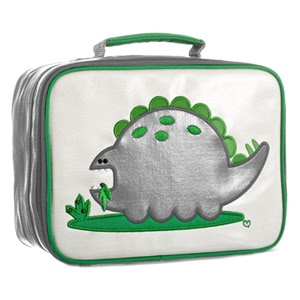 I love Dante Beatrix lunch boxes.  The zipper pulls are little devil horns and on the back is a name tag sporting the shape of a devil head.  Within the tag it says, "eat your veggies."  These are modern, colorful, and cheeky.  They're also non-toxic coated canvas which is bpa, pthalate and pvc free.
Tweet
Posted by Eco Mama 3 comments: 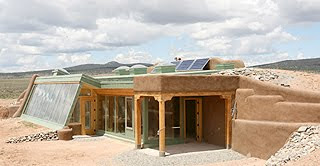 Last night I got to watch the most exciting documentary--Garbage Warrior. The film chronicles renegade green architect, Michael Reynolds journey to build the ultimate sustainable homes. It's a couple of years old, running on the Sundance channel at the moment and soooo worth a look.  I was captivated and inspired.  And I want to live in one of these remarkable houses!  Imagine being completely off the grid and never needing to go to the co-op.  Imagine banana and avocado trees growing in your own atrium.  Imagine being free to live outside of the eight hour grind and dysfunctional system.  Imagine doing no harm to the planet. 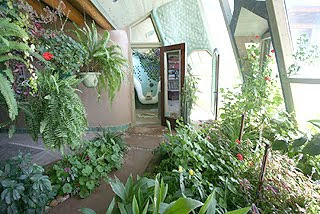 Reynolds uses tires, bottles, cans and other recycled materials to build entirely sustainable homes known as Earthships.  New Mexico based Reynolds incorporates water harvesting, integrated sewage, wind and solar power, food production and thermal mass.  The homes are fascinating, intelligent, intuitive, very affordable, and should be very common.  The homes are also beautiful.  Glass bottles make for a gorgeous stained glass look and the organic lines remind me of Gaudi and Hundertwasser.   I live in a so called green house and it is a joke compared to these.  Watch the trailer and find out more HERE.
Tweet
Posted by Eco Mama No comments:

Cantaloupe Smoothies, Fragrance Free Day, and Inside the Minds of Animals One of my favorite summer drinks is the Cantaloupe Smoothie.  It couldn't be easier to make (cantaloupe and ice in the blender) and it's packed with nutrition and refreshing goodness. 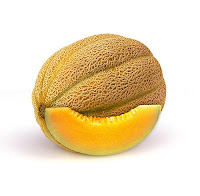 Canteloupe is rich in beta carotene and makes a great source of vitamin A which is beneficial for vision health and cancer prevention.  People who eat diets with ample vitamin A have a reduced rate for cataracts by about 39%.  It's also high in vitamin C which is a powerful antioxidant and immune system necessity.  Just one cup of cantaloupe has over 100% of what you need daily.  Fiber, B vitamins, and folate are all contained in cantaloupe.
The origins of cantaloupe date back to ancient times in India and Africa, were cultivated in Egypt and later in early Rome and Greece.  The name cantaloupe  comes from Cantalup, an Italian village where they were cultivated in the 1700's.  They're also known as muskmelons and rockmelons.  Cantaloupes  are part of the cucumber and squash family and also grow on a vine on the ground.
Choose melons that have a hollow sound, have a tan or cream color under the netting-like first layer of the skin, and smell like cantaloupe around the stem.
cantaloupe image credit: giniger

Friday, August 13th, is Fragrance Free Day.  With all the dangers of fragrance, not to mention it's just plain inconsiderate to others, I think it's a brilliant idea.  I rate fragrance right up there with cigarette smoke, in fact to me it's even worse.  Wouldn't it be great if people realized how dangerous these chemicals were and stopped polluting the environment with perfume?  That might sound harsh, but check out what's actually in fragrance.  I'm not talking about plant derived essential oils, those are not the same.  I am talking about the perfumes that go into laundry detergent, perfumes, air "fresheners," soaps, shampoos, lotions, even trash bags can be perfumed, the stuff is everywhere.  And it makes us sick.  And we should all get as educated as possible about this.  There will be a live Twitter Q&A with chemical experts.  Participate HERE.  Meanwhile, check out the EWG for many informative articles regarding the dangers of fragrance. 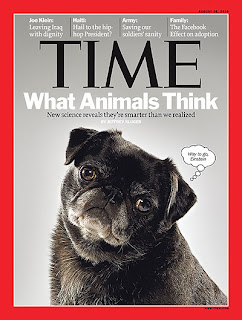 Time Magazine recently did an article (cover story) on the intelligence of animals making the argument that they are much smarter than once believed.  Jeffrey Kluger did a great interview with Charlie Rose citing some of the various studies and the concept that animals are sentient beings which should not be eaten or treated unkindly.  Obvious to my readers but really nice to see this becoming more and more mainstream.  Watch the interview HERE.
Tweet
Posted by Eco Mama 1 comment:

"COUNTDOWN TO ZERO traces the history of the atomic bomb from its origins to the present state of global affairs: nine nations possess nuclear weapons capabilities with others racing to join them, with the world held in a delicate balance that could be shattered by an act of terrorism, failed diplomacy, or a simple accident." 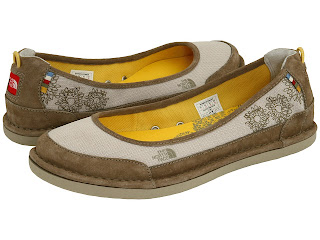 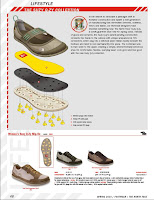 The North Face has made great strides in the realm of eco friendly footwear with their first-ever glue free Suzy Q-Zy shoes.  Glues can be a nasty part of shoe making, containing VOCs and unpleasant chemicals.  This is no good for the people creating the shoe, the environment, or for consumers who want to vote green with their green.

By using TPU connectors, the shoes consist of layers that snap right together.    Shoes in the Suzy Q-Zy collection are not only glue free but are constructed using recycled materials.  These cute little ballerina flats come in different style and color combinations and are perfect through Summer, leading into Fall.  They look great with cropped pants, skirts and dresses and are comfortable and true to size.  The colors are neutral and go with many different things and they are sporty and feminine at the same time.  Find them HERE.
Tweet
Posted by Eco Mama 3 comments: 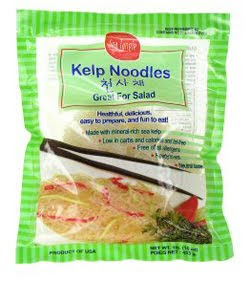 Do you know about Kelp Noodles?  I got really excited about them a few months ago, but the way I was preparing them didn't really do it for me completely.  Then I learned how to make them properly and I'm hooked--big time.  It's all about the sauce and mixing them with other textures. 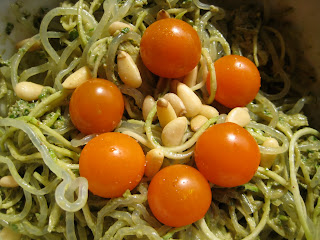 My current obsessions are pesto (as pictured) and a Thai version.  My pesto is very basic--just pine nuts, salt and basil in the food processor and the Thai version consists of raw almond butter and Thai spices and herbs. The noodles make for the perfect summer dish and the options are endless.  This is some serious raw food goodness, very filling and satisfying and I actually like it much better than your standard whole wheat or rice noodles.

You can also add them to heated food, for instance they make for a great noodle bowl.  Instead of rice noodles in your curry, these work great.  Find them HERE.
Tweet
Posted by Eco Mama 3 comments: