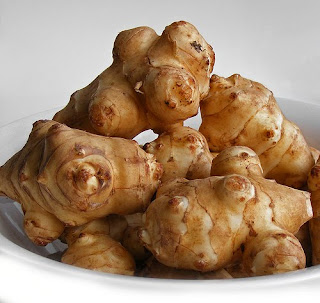 I tried a new food today, sunchokes.  Also known as Jerusalem Artichokes, they are not from Jerusalem but a native of North America.  Apparently, a French explorer brought some back to Europe and gave them to his Italian friend who gave them the name girasole articicco, which means "sunflower artichoke." Americans misunderstood that for Jeruselum Artichoke, and the name stuck.  Sunchokes are related to sunflowers and contain potassium, vitamin C,  B6, riboflavin, phosphorus, and iron.

They are curious looking, like the children of ginger and potatoes with a little galangal thrown in,  and they taste like a cross between potatoes and artichoke hearts.  I cut them into chunks, put them in a skillet with a little salt, pepper and coconut oil and roasted them for almost an hour and they turned out pretty good.  I'm not rushing out the door to buy more, but they are quite enjoyable and it's always fun to try a new vegetable.  I'm looking forward to trying them again roasted with garlic and other root veggies.