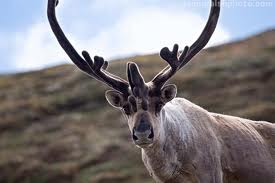 Did you hear about Sarah Palin killing that Caribou?  There's been a lot of talk surrounding this, including a scathing letter from Aaron Sorkin who was appalled by the televised act.  He's outraged, but still somehow can't connect the dots enough to modify his own habits.  Sarah Palin is Not my favorite person, let's just say I find her both embarrassing and a little scary for many reasons.  I'm not a fan, I don't watch the show, but I did see a snippet of this incident.  I think it provides an opportunity for people to examine how they feel about eating animals.  What about the shooting of that animal?  She fishes and hunts for food, is that okay?

As most of my readers know, I'm not vegan, but nearly so.  I haven't eaten meat since I was a kid, and try to purchase mostly vegan everything.  I'm okay with organic honey, people raising truly cage free chickens for their own egg-consumption, same thing with goats and whatnot as long as they are treated well--like dogs and cats.  Sometimes I'm torn between eco-friendly and vegan which are sometimes at odds, but I try to make conscious choices.  This is not about me but I want you to know where I'm coming from.  Foodwise, I don't eat meat from any animals, eggs, or dairy.

This is not the majority behavior and I know it.  Most people eat meat.  While I wish they wouldn't, they do and if they are going to do it, I think it's preferable for them to go out and get their own rather than support all the suffering that takes place in factory farms.  And if more people went out and got their own meat, many more people would become vegetarian or vegan because they wouldn't be able to stomach it.

Now why SP, with all her money and resources and supposed love of nature and the environment has chosen to eat this way, I do not know.  But I have more respect for her hunting her own food than I do for someone getting it all packaged up from the butcher.  Do I think it should have been on television? No.  What is so disturbing to me about this (and other televised violence) is the exploitation factor and that it makes it normal.  Like all those CSI shows and fascination with killing, it embeds itself into the zeitgeist.  I also found it disturbing that SP was so gleeful and really seemed to enjoy shooting that poor beautiful creature.  I thought it was vulgar.

But she said she saw it as food--so maybe that's a carnivore response to such an animal, I don't know.  It's Alaska and people have been hunting there (and all over the place) for hundreds of years maybe it's ingrained.  I hope she takes the old school Native American approach and uses every bit of that animal with gratitude.  As for Sorkin's letter--if he had said that was so disturbing to him that he will no longer eat meat combined with all his outrage, fine.  But he said he enjoys eating meat but just doesn't want to get his hands dirty.  Do I think there is something off with that?  You betcha.
Tweet
Posted by Eco Mama