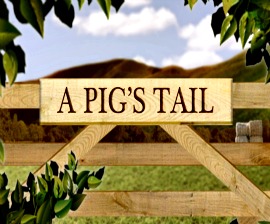 Today is Food Day, and the makers of Wallace and Gromit and the Humane Society released Chicken Tail, a children's film about factory farming.  Most kids have a natural connection with animals and already feel a strong sense of compassion.  They don't want animals to suffer.  There is a huge disconnect between loving animals and killing and eating them.  Most people would never think of eating their pets but are happy to eat a pig.  A lot of folks, not just kids, don't fully compute that "ham" equals pig and what had to happen to get it on their plate.

I can't help but feel this film is even more for adults than for children, but it would be a good way to attempt to explain factory farming.  Of course those conditions are so horrid that it can't be depicted in a kids film, but there are allusions to a dreadful life and in the end, a message of hope that humans will figure it out and go back to the old school farming methods offering more dignity to both animal and farmer.  It's great for opening up some dialogue on the topic.  Watch it for free HERE.
Tweet
Posted by Eco Mama