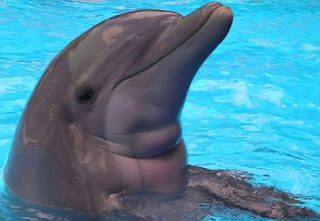 A group of scientists are working on a "Declaration of Rights for Cetaceans," claiming that dolphins and whales have sufficient self awareness and intelligence to be given basic human rights.  No more whaling or keeping cetaceans in captivity for entertainment purposes.  Decades of research have led experts to conclude that cetaceans, though not human, have a level self awareness equal to that of humans (I would argue more in some cases).

"Dolphins are non-human persons," says professor Tom White who has authored a book on the subject, "a person needs to be an individual. If individuals count, then the deliberate killing of individuals of this sort is ethically the equivalent of deliberately killing a human being.  The captivity of beings of this sort, particularly in conditions that would not allow for a decent life, is ethically unacceptable; commercial whaling is ethically unacceptable.  We're saying the science has shown that individuality, consciousness, self awareness, is no longer a unique human property."  Works for me. Read more here.
Tweet
Posted by Eco Mama