Beef up your Vegan Holiday Repertoire with these new cookbooks 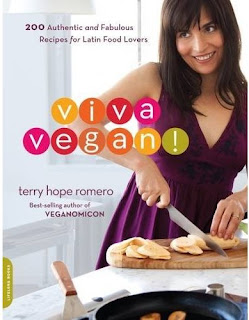 Need some ideas for meals to serve during the holidays?  If you're cooking vegan or vegetarian for yourself, it's no big deal.  You already know how hearty and satisfying the food is.  But if you are having veg-resistant guests (sometimes that can happen inadvertently), it's nice to have a few tricks up your sleeve.  A lot of people still think that a meal is not complete without that centerpiece meat-dish, particularly on special occasions.  Sometimes you have company for  a few days and want to come up with some dishes that will wow those omnivores.

Here are some new vegan cookbooks for some fresh inspiration.   I have not had time to try many recipes, but I'm always interested in the latest vegan cookbook and I'm so happy to see that genre growing.  VIVA VEGAN

comes from Terry Hope Romera, co-author of the classic and reliable Veganomicon,  Vegan Cupcakes Take Over The World,

Viva Vegan is for those who like a little spice.  Romero has veganized traditional Latin cuisine by drawing from her own Venezuelan background and her experience working in the Latin NYC restaurant, Bachue. There is a color photo spread in the center and the book contains a good 200 recipes.  Would make a great holiday gift for that person who likes Latin American cuisine.

is perfect for those who feel like they need more hearty fare.  I think the title will also appeal to people adopting the "Meatless Mondays" tradition or who are transitioning.  I am not a fan of anything resembling meat and thought at first glance this might be bogged down with meat substitutes and faux meat, but it's not. I also prefer lighter fare and this book has that as well. I appreciate dishes like  the twice baked sweet potato, the kale chips, and the heavier polenta with Puttanesca.  The center color pictures look wonderful.  This would make a great gift and perhaps a little nudge to those who would like to eat healthier without sacrificing a thing.

Finally, you've been out showing your guests around town all day and come home hungry and need something quick to whip up.  FRESH AND FAST VEGAN

will give you some new ideas for quickie meals that are not stingy on nutrition.  This book does not contain pictures--something I really feel are important in a cookbook.  But the recipes are straight forward, the layout is easy and the book is accessible to someone who might feel intimidated by vegan food prep (as hard as it is to believe that vegan food could be intimidating, I hear it all the time).  I think it's a nice book for anyone that doesn't want to spend a lot of time in the kitchen, but still wants variety and flavor.
Tweet
Posted by Eco Mama

I had to laugh that you used the term beef up and vegan in the same title.

I'd love all these books, especially the first one.