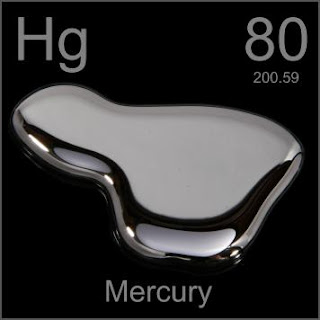 A Federal study has come out warning that mercury is found in 100% of fish. We've known for a long time that fish such as tuna contains mercury, and have been told not to eat too much sushi (it's the sashimi). But now the government is admitting that mercury is found in all fish. Mercury is a powerful neurotoxin and should be taken very seriously. Before eating any more fish--you might want to just read up a bit so you can make an informed decision. For the record, we don't eat fish at all. As for getting the omegas everyone's worried about, we do fine with flax and hemp and walnuts.
Fish isn't the only thing you should worry about when considering mercury contamination. High Fructose Corn Syrup also contains mercury. First of all, in my opinion, one should not touch HFCS with a ten foot stick. There is a diabetes connection on top of a host of other maladies, it's just garbage. And they put it in everything! This has been on my list of Do Not Eat for years, right along with hydrogenated fats and a bunch of other stuff, but it never once occurred to me that HFCS would contain mercury of all things.
Think of how this affects us, especially little kids--and fetuses. No wonder Alzheimers and autism is on the rise when we are pumping ourselves full of neurotoxins and don't even know it. This is wrong on so many levels--those fish are the canaries in the coal mines.
Tweet
Posted by Eco Mama

I love your blog! I just came across it and went back to read all of your old posts.

This is a great post and something that everyone needs to be aware of.

Keep up the amazing work!!!!

Stunning findings...stunning. My husband recently read "In defense of food" and our daughters now walk around asking, "Is it food or a food-like substance?" HFCS is banned forever in our home. Great writings! All the best, Mandy