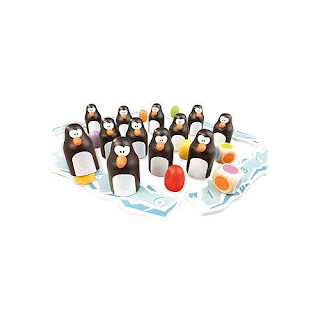 What if there was a toy company that not only used non-toxic paint and wood for their toys but grew trees to replace those used in production? Well guess what? There is such a company. Blue Orange Games actually plants two trees for every one used. If only other companies could be this responsible. They totally won me over with that straight away without ever seeing the toys, I confess. But my first experience with one of their games is a big success in terms of sheer fun factor.
The award winning Pengaloo is visually appealing and features an element of surprise. Players try to find colored eggs (hiding under the wooden penguins) corresponding to the colors on dice. It's a little more involved than straight "Concentration" but basically the same idea, it's a memory game. There are suggestions in the pamphlet for variations and of course, you can make up your own.
I'm a big fan of board games and think it's a great way to bond with your child. On day one, I played this game with my son for a good hour, with lots of "Let's do it again!" Then he continued to play by himself for another hour. He's gone back to it many times since and says it's one of his favorite toys already.
On a practical note, the box, made of recycled and recyclable cardboard, is sturdy and designed to house all the pieces nicely for easy cleanup and storage. I highly recommend this toy. Ages 4+/Blue Orange Games.
Tweet
Posted by Eco Mama

Cool! Thank you so much for taking the time to do this blog! I have a young one, so any advice about what to get him is highly valued and appreciated! :-D

You're so welcome jenspsyche and welcome! Thank you for visiting my blog, please come back any time.
xoxo
EcoMama