Another Reason to Buy Organic 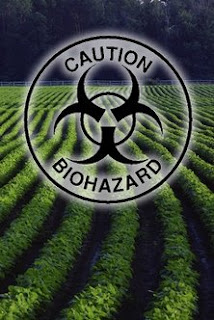 Finally, a study to state the obvious and yet another reason to buy organic. Organic food is free of GMOs, so if pesticides aren't enough to scare the crap out of you, there has finally been a study to confirm that indeed Frankenfood isn't such a great idea. How it isn't common sense that one probably shouldn't cross a chicken and a tomato and then eat it, I will never know, but Journal of Biological Science has published a study conducted by a group of international scientists, stating pesticides and GMOs make people sick.
This is all frustratingly obvious to many of us, but okay, good, now it's on paper officially (again). The study states, "The health crises may be more important than the international financial crisis because of the lack of transparency of the regulators." Since over three quarters of our non-organic food supply contains GMOs, (and there are no labels alerting you) I would say you're really taking your health in your hands eating this stuff, and that's reason enough to buy organic, pesticides aside. What kind of culture poisons its own food supply to make money? Don't support it! Buy organic!
Tweet
Posted by Eco Mama