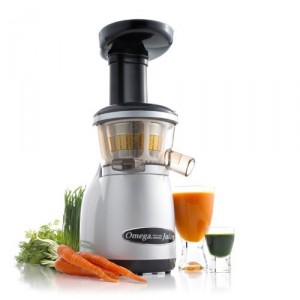 Meet my new favorite juicer:  the OMEGA VERT.  Why do I love it so much?  Because it does everything--including juice wheatgrass.  I've used several different brands, and this is the easiest, most versatile juicer I've had yet.  I'll try to contain my excitement long enough to tell you why.

First off, it's good looking.  This is important because you must leave it out on the counter, if you don't, you won't use it.  It comes in either white or a sliver-black combo, so it will match your appliances.  And, it has a small footprint and is short enough to fit under your cabinets.

Next, it's quiet.  I've been using a Breville Elite and though it is beautiful, it's LOUD.  There have been many times I haven't juiced just because I couldn't bear to hear that noise.  I can hold a telephone conversation while juicing with the Omega, something I could never do with the Breville.

And while we are comparing, the Breville is nice because it allows you to pretty much drop in whole fruits and vegetables due to the large feed chute.  But with the Omega, I can still load whole carrots, celery stalks, and kale leaves.  I do have to cut up apples, but I just do it while the juicer is processing the other stuff, it's no big deal at all and really doesn't take much time at all--believe me, if it did, I'd really be put off.

It's so pleasing to use this juicer, the whole process is enjoyable, almost meditative.  The Breville, by contrast, is not pleasurable to use, it's almost violent the way it processes and as I said before, very very loud.  Whatever speed I might gain is not worth it, and when you factor in clean up time, I'm not sure it's any faster in the end as the Breville takes longer to clean.  I still like the Breville, but I bet it stays in the cabinet now. 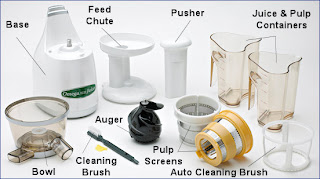 You run a little water through the juicer when you're finished, then take it out and rinse.  The screen is so much easier to clean than the Breville.  It comes with a brush that looks like a big toothbrush and works great.  Of all the juicers I've had in the past, this one is the easiest to clean.  It looks like a lot of parts in the photo, but they all go together quickly and intuitively.  I can make juice and have the juicer cleaned and set up ready for the next use in less than ten minutes.

This juicer can handle wheatgrass--this is Huge.  I was thinking I'd eventually have to get a separate wheatgrass juicer because the Breville won't juice it, and that is a deterrent because I don't want all that stuff on my counter.  The Omega juicer, in this sense is like two juicers in one.  It juices wheatgrass beautifully, and oh how fabulous it is to be able to juice other stuff along with your wheatgrass.  With the other wheatgrass juicers I had, they only did the wheatgrass, so if I wanted to add another juice to cut the taste I'd still have to pull out another juicer and clean two at the end.  For those of you who haven't had wheatgrass, it can be a little intense by itself, so it's very nice to have the option to add other produce right there in the same batch.  A little cucumber and apple mixed in with the wheatgrass and you have a refreshing drink.  It also does a better job juicing greens and things like pea shoots (which are delicious). The Omega Vert's juice is more pulpy than the Breville, but that's fine with me, if you don't like pulp, you can strain the juice.

If you need to make your juice ahead of time, you can with the Omega Vert.  This is another huge benefit, sometimes you are on the go and need to pre-make your juice and take it out the door with you.   With the Breville, or any centrifugal juicer, it's recommended you drink your juice within thirty minutes because it starts oxidizing due to the force at which it's made.  The masticating Omega allows the juice to remain intact longer before the enzymes and nutrients begin to break down, they say up to 72 hours, but I don't know that I would push it that far, especially with the ease at which this juices, I feel like I can have juice any time I want and I am not deterred by the effort or mess.  Still, it's very nice to be able to make the juice in advance.  This means you will drink more juice because this is a major convenience.

Not all masticating juicers are created equal.  For instance, many years ago, I had a Champion juicer.  and though it did the job, it had an enormous footprint taking up way too much counter space and it was a devil to clean.  No comparison to the Omega Vert.

I've used this awesome juicer every single day since I got it a month ago I'm in love.  My six year old also loves the Omega Vert and gets a big thrill in feeding fruits and veggies into the chute.   This gets him excited about drinking healthy green juices--how cool is that?  It's become a ritual.  I can't recommend this juicer highly enough.  If you are thinking about getting a new juicer, or a wonderful holiday gift for someone else--get it.  Don't even think twice.  It's a juicer you will use--it will be right there on your counter looking great and calling your name.  It will not give you a headache or wake up your sleeping household members, and it will behave itself when it's time to clean it.  And if you need more incentive, here it is: it has a 10 year warranty.  Find it HERE.
Tweet
Posted by Eco Mama