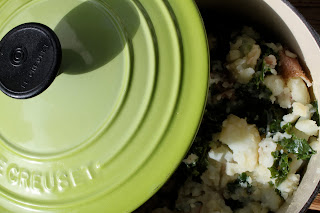 Need some festive food to celebrate St. Paddy's Day?  Pretty much every year I make some version of the traditional Irish dish, Colcannon.  It's fast, easy, cheap and fairly nutritious.  It's basically just mashed pottatoes with cabbage or kale.  It's warming and hearty and great for cold weather--good Irish comfort food.

Here's what you need for a 2 quart pot full of Colcannon:
(organic everything)
4 medium-large red potatoes
one leek
half a bunch of kale, chopped
earth balance
sea salt and pepper

All you do is cube some potatoes--I use red because I think they have a better flavor and they are said to not spike your blood sugar the way russet potatoes do.  Four potatoes are enough to fill my 2qt. pot.  Boil the cubed potatoes in one pot, and in another pot saute some chopped leeks.  Add some chopped kale (cabbage works too, but I like kale), then put a lid on in and take off the heat.

When the potatoes are done, drain off the water and add them to the leek mixture and stir in some earth balance, salt and pepper (some people like to add some soy or hemp cream) and voila!  You are done!  Happy St. Paddy's everybody!
Tweet
Posted by Eco Mama

Mm, that looks so delicious! I may have to make some belated colcannon myself... I'm a mashed potato fiend, so if I can squeeze in some leafy greens along with my creamy spuds, so much the better. :)

I'm sure yours would put mine to shame Hannah!
xo
Eco Mama