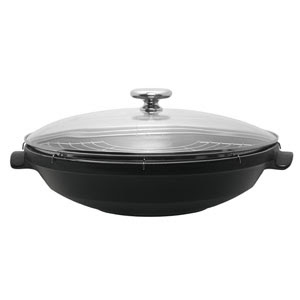 I have a beautiful wok made by Boden.  You know where it is?  In the attic.  It's very pretty but food sticks to it and it's a bear to clean, so I put it in the attic thinking I'd get ambitious and try again.  It's cast iron but it has some sort of textured enamel coating that makes food stick.  What a deal breaker.

that food does Not stick to and is a cinch to clean--now this is the wok to have.  I love Emile Henry.  They are completely eco friendly.  The cookware itself literally comes from the earth!  The Burgundian clay mixture comes from decomposed rock that is millions of years old.  Even the glazes and finishes are derived from all natural sources and are non toxic.    The Emile Henry factory is also eco friendly and adheres to strict environmental practices.

If I know I can throw some veggies into the wok and have a meal in about five or ten minutes with less than five minutes cleaning time, I'm in!  Sometimes by dinner time you're tired and not up to the challenge of making a healthy meal.  But you still want something hot and hearty.  With this wok, there is no excuse not to eat healthy.  With the wok, you only lightly cook the veggies, so there are more healthy enzymes in tact and the nutrient level is higher.

I put a tiny bit of coconut oil in the pan, along with a couple of garlic clove halves (to be taken out later, it's there just to flavor the oil).  Then I toss in whatever veggies I have on hand.  Always broccoli, maybe some bok choy or napa cabbage, some carrots.   A little chili oil or grated ginger if it's a cold day, some green herbs like cilantro,Thai basil, or lime leaf.  There are infinite possibilites and flavors to come up with. In five minutes or less you have a great meal, just like that.  I like it served up with a big salad and if you need something heartier, some quinoa.

The wok is also oven safe and for Thanksgiving, I used it to make my stuffing.  It was so easy!  First I sautéed some minced onion, then added some diced mushrooms, then diced celery.  I let the flavors mingle, then added whole grain bread cubes (already in the bag from the co-op).  Then I poured some vegetable broth over it, added some herbs, mixed it up, put the lid on and baked for about an hour.  It was crazy good and there was just barely any left to enjoy the next day.  Clean up took just a couple of minutes even though some of the stuffing was pretty baked on.  I will definitely be repeating this for our Christmas dinner.

The wok looks wonderful on the table and the ceramic acts as a warmer, keeping the food from getting cold.  You can't go wrong with Emile Henry.  I know it's a little spendy, but this is something you buy one time.  And then you pass it down through generations, so I think it's well worth it.  It comes in red or black and would make a killer holiday gift for the foodie or cook on your list.  Find it HERE.
Tweet
Posted by Eco Mama