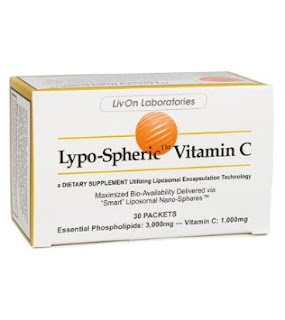 There's a new way to get your vitamin C, and it's supposed to be more effective because of the way it's delivered.  It's called Lypo-Spheric Vitamin C, by LivOn Labs, and it contains "smart" lyposomal nano-spheres filled with vitamin C that are said to be easier for your body to absorb than when taken in other forms.  Here is an example of how nano-technology can be used in healthful pursuits.  I'm not a big supplement person, and I definitely think the best way to get your nutrition is from healthy organic food, but I was excited to try this, particularly for winter and for travel when I feel my immune system is taxed the most.

After my initial case, I bought two more cases of the stuff and I think it really helped my body to fight off some nasty bugs that were circulating the last couple of months.  I was convinced enough to keep buying it, and it's not cheap.  It costs about $30 a case, or $1 per packet, however, if it works then I think it's worth it.  For a long time, I was taking Emergen-C, but it contains sugar and I feel that the LivOn vitamin C is superior.  I've tried powders and capsules as well, but those can upset my stomach and this does not.  It really seems like it helps with my energy level as well as boosts my immune system.  I've read about people using this in extreme cases, such as mercury poisoning.

Each packet contains 1000mg of vitamin C in a gel that is best taken in a liquid and swallowed.  You can just open the packet and pop it into your mouth, but it tastes terrible.  If you float it in liquid, you don't taste it and it's down with one gulp.  It's meant to be taken on an empty stomach for better absorption. Find it HERE.
Tweet
Posted by Eco Mama